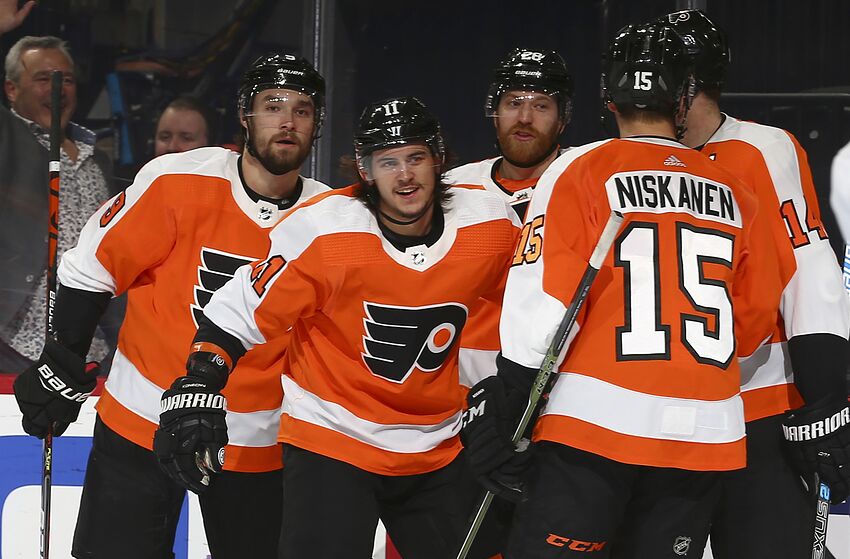 Fresh off a terrible 1-4-1 road trip, the Philadelphia Flyers returned home on Wednesday to face the league-leading Washington Capitals, and they came away with a 3-2 victory.

The Philadelphia Flyers make no sense.

After looking like a total mess for almost all of their season-long six-game road trip, they finally came back to the Wells Fargo Center last night less than 24 hours removed from their latest loss and managed to defeat the high-powered Washington Capitals 3-2 in an excellent team performance.

Home/road splits are expected in sports, but this is getting ridiculous. I’m not complaining about the Flyers’ sterling 14-2-4 mark at home this year, but it sure would be nice to balance it with something better than their current 9-13-2 record on the road. And all this coming from a team that has told us in recent years that sometimes they put too much pressure on themselves at the Wells Fargo Center, which has led to them underperforming in front of the home crowd.

Again, it’s great that they’ve seemingly made the turnaround, but some consistency would be nice.

Complaints about the team’s performance of late should be put aside, however, when discussing Wednesday’s victory over the Caps. The Flyers hung with a true contender and did exactly what they needed in order to win.

Things certainly didn’t look promising early, as the Flyers allowed a pair of Washington goals after opening the scoring. But, trailing 2-1 in the final minute of the first period, Robert Hagg of all people energized the team with his first goal of the season.

Things certainly weren’t easy or pretty after that point, but Carter Hart settled down to stop all 20 Capitals shots he faced over the final two periods. What’s most encouraging is that he didn’t have to stand on his head to get the win. No show-stopping saves were needed on this night because the Flyers effectively bottled up a potent Washington offense as well as can be expected.

Alex Ovechkin, who has killed the Flyers (and most teams, really) for years, didn’t find the scoresheet. The Flyers kept him to four shots on goal in 20:35 of ice time. He’s actually pointless in his two games against Philadelphia this year, which is a big credit to the Flyers.

Most importantly on the night, the Flyers’ penalty killing really came though, stopping the Caps cold on all five of their power plays. They were really playing with fire by taking so many penalties, especially the pair of infractions committed by Sean Couturier. It wasn’t fun to watch the Flyers’ best penalty killer sit in the box for two long minutes, helpless to do anything.

But the rest of the PK unit picked up the slack, even providing the winning margin when Kevin Hayes scored on a shorthanded breakaway late in the second period to give them a 3-2 lead. Scott Laughton did not earn an assist on the goal, but he made a huge play to spring Hayes by eliminating Washington defenseman John Carlson.

After taking the lead, the Flyers played a bit too much “hang-on hockey” than you’d probably like to see, but it was understandable for a team in need of a confidence boost and who was clearly tired after having just coming home late the previous night.

Now the Flyers can take Thursday off as they prepare for their next test: a home date on Saturday with the Tampa Bay Lightning. And maybe, just maybe, this home success can start to have a trickle-down effect even when they have to play away from the friendly confines of the Wells Fargo Center.

Next: Flyers could sure use some home cooking

Can Alain Vigneault just petition the NHL to let the Flyers wear orange every game? It’s a thought.